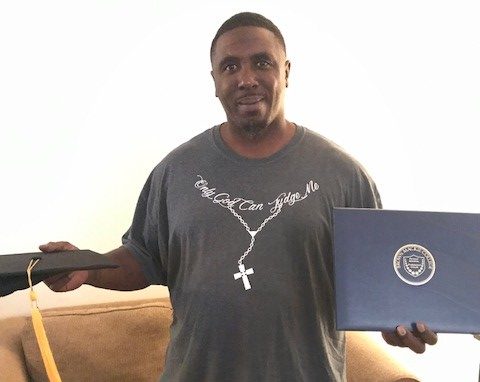 Next month, Donald will graduate from college, on the dean’s list, with a 3.8 GPA. And he did much of that while living out of his car.

Donald grew up in poverty in Memphis, Tennessee. Desperate to make ends meet, he dropped out of school. He knew that decision deeply disappointed his mother but he didn’t feel like he had any other choice. When his mom passed away, Donald decided to move to New Mexico and try to build his independence. He found an apartment but quickly found himself unable to pay rent.

He knew he had hit rock bottom when he became incarcerated in 2012. Donald found himself at a crossroad. “Did I want to stay in this position or resort to being on the streets?” While his mother had always said she was proud of him, he knew she would have wanted him to get his high school diploma. So he took the opportunity to earn his GED through the program offered in jail. And with the help of his teachers, he enrolled at CNM.

Released from jail and staying at a halfway house, Donald continued his studies. Unfortunately the halfway house was only for 90 days and upon release, he became homeless once again. But he stayed in school. Often he would park his car at the school and sleep there, and then get up and go to classes. Overwhelmed by his situation, Donald often thought about giving up. “You can’t focus on education when you don’t know where you’re going to sleep”.

His advisors at CNM noticed him struggling and provided resources to help him find shelter. Once at the shelter, he started to see a counselor once a week to help him manage his mental health and housing issues. Suffering from PTSD from his childhood and incarceration, Donald found it hard to be among so many students at CNM. He dropped out of CNM and registered with Brown Mackie College where he felt it would be more manageable for him.

After 3 months in the shelter he had to move out due to their time limitations. Going back out to the streets and living in his car, he continued to work on his degree and find housing. It took over 13 months to finally get connected with SHC-NM but in 2015 he received a voucher for housing. Within 30 days SHC-NM staff helped him secure an apartment. Now he no longer considers giving up. “There is no reason to give up, I can continue my education. Because of SHC I can think clearly and see tomorrow.”

So next month when Donald graduates, he will be able to plan for his future. “Before this, I never saw my future, I lived one day at a time. I now have peace of mind and independence. I couldn’t have done this without a roof over my head. SHC gave me an opportunity to have an address, and I can focus on furthering my education after graduation.”