A Home, A Neighbor, A Community 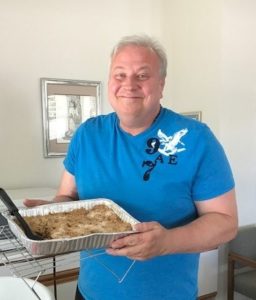 “We have to form a community, we are dependent on one another.” ~ Tony

It is with great sadness that we announce long-time SHC resident, Tony, passed away on November 1st. Tony loved his apartment community. He was avid about the community garden, prepared food for every Thanksgiving and Christmas potluck, helped to decorate the community tree, and even donated cookies that he baked for us to take to the families with children at our apartment community in Gallup. In 2017, SHC ran a story about this very special man and we would like to share it with you again.

When I went to interview Tony, he was baking a green chile apple crisp and urging me to bring it back to share with the office. It became clear as he told me his story, that giving back to the community is not just words, but how he lives his life.

As an Air Force veteran who worked as a senior software technician, Tony never imagined that he would become homeless. Upon leaving the Air Force, he lived off investments and attended graduate school, intending to become a doctor of oriental medicine. He was even planning a trip to China. However, 2 months before he was scheduled to leave, Tony was seriously burned in a fire while helping a friend clear some brush from his property. The experience left him not only physically injured but also suffering from PTSD and depression. He was also broke. The financial crisis had wreaked havoc with his investments. Without the money from his investments and unable to work because of his injuries, Tony lost his home.

Initially Tony tried to get help from the VA, but because his injuries were not combat related, he could not receive services from them. He ended up at UNM where he still receives mental health counseling. However, Tony still needed a place to live. He was able to live in crisis housing for 6 months but when that ended he ended up “couch-surfing” with friends or staying in shelters. With the help of his case manager, Tony filed for disability and housing. He was permanently housed in a SHC apartment home in 2010 and has lived there ever since.

“I am so grateful for SHC and my home,” states Tony, “these are not just apartments, they are homes to people. When I was homeless, all my networks dissolved, they got chipped away a little at a time. We have to form a community, we are dependent on one another.” For Tony, community is at the heart of everything; he believes that if you can give back to others, you should. He makes food for his fellow tenants during the holidays and, when he was finally able to afford one, he bought a car big enough to take his neighbors to food banks. So while Tony is grateful for his home and his community, I am grateful to have Tony as a neighbor and friend.